After reading this story from Ashley, I immediately thought of Frank Booth from the film Blue Velvet. But it's about a girl. A teenage girl. Holy hell. For those of you who don't know what I'm talking about, please see the video embedded after the story: 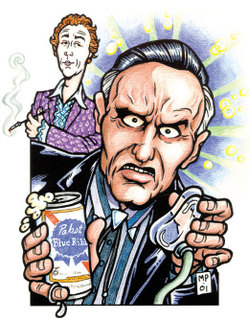 And just when I think I’ve seen it all.

We’ve all seen the same people on the bus. The rowdy kids sticking their arms out the windows, the ones with the strollers forcing elderly people out of their seats so they can squeeze in, the ones who roll hand-made cigarettes, the drunks who try and sneak a sip of Lucky when they think no one is looking. But has anyone ever seen someone doing drugs? I have, and she’s not pretty.

Let me just describe the situation. It’s about 3 o’clock in the afternoon and the 18 Jefferson is beyond full. I’m pretty sure the bus driver is turning people away because the bus was as packed as a mosh pit at a rock concert. I am in front of the back door, pressed up against people I don’t know and facing others I’d wished I wasn’t facing.

Then, this girl gets on. And this girl was crazy.

First, I hear her, from where I am, telling the driver “my friend has my transfer. She’s at the back of the bus.” Of course he lets her on - her friend has her transfer.

Then, she starts yelling at other passengers, “excuse me!” Now, I say yelling, because I shouldn’t be able to hear her from where I am. Then she tells her friend, “Hold onto me. I’m saying excuse me. If they don’t move, they’re rude.” No, they’re not rude, there just isn’t any room for people to move to. So, naturally, she starts pushing her way to where I am. She squeezes in with her friend in front of the back door and is now about an arms length away from me.

“I just bought so many pills! Yeah, look!” *Opens her purse and shakes around multiple pill bottles*

After screaming “whore” at a girl who got off the bus, the girl reaches into her purse and pulls out a small piece of paper and I now smell marijuana. I turn and look at her and as I turn back, I hear her tell her friends, “hold me up” and “cover me.” I can see her moving around some powder on what looked like a gum wrapper. Then she says, “It’s like people have never seen drugs before.” No, I’m sure they have, just not in the hands of a 16-year-old while riding public Transit during rush hour. But, that’s just a guess.

I’ll state here that I’ve never done drugs and know little, to nothing, about them.

I move back up onto the first stair and pretend to text on my phone when she and her two friends sit down in the three seats facing the back door but there were only two open seats so one girl sat on another girls lap. Little Miss Junkie then asked the elderly man beside her to move over. To where, the floor? He wasn’t taking up any more room than he was allowed. He looked at her and looked away without moving an inch. She turns back to her friends, “I asked him to move and he just looked at me.” Uh, DUH.

She starts pointing at someone and at first I think it’s me, and saying “What the f**k are you looking at? Don’t f**king look at me. Next time you look at me I’ll kick you a*s.” Then, thankfully, I figure out she isn’t talking about me and I make my way to the first open seat. I sit down and continue to look out the window and stare around the bus. But when I glance down at her for a second, I see her snorting whatever was in the gum wrapper and then stare blankly ahead.

She just snorted coke, on the bus, during rush hour.

Why do I assume it was coke? Because there was a nice white line of a chalky-looking substance smeared across her cheek, and I doubt she was snorting Rockets.