Here is a very descriptive story from Jenny about a bunch of guys fawning over poop on the bus:


On New Year's Eve in 2008, I caught the 11 heading downtown. I grabbed a seat near the middle of the bus, closest to the doors. Behind me, I could hear a bunch of young guys commenting on their friend's disgusting, yet impressive, accomplishment of taking a shit directly on one of the bus seats only moments before. Their conversation was full of comments like, "That's totally sick, man," and, "I can't believe you just did that." However, they must have been rather proud of this feat, since they remained sitting in close proximity to the crap, as if it were one of the guys who was joining them on their New Year's adventure.

This was taking place only two seats away from me. I was terrified, although tempted, to turn around and look at the spectacle unfolding. Since the odor had graciously not yet wafted in my direction, I decided not to turn around for a peek. The description of the turd and the nervous repulsion of the passengers nearby was enough to paint a pretty detailed picture in my head. Now it's in yours. 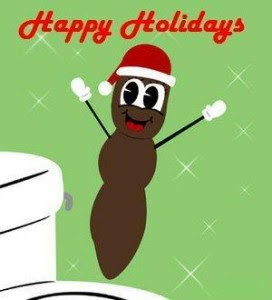