He Broke His Balls

Here's a bit of an insane story from Marcie:


It was a miserable February evening: frigid, windy, dark, and on the bus. I had been working at the University all day, and my brain was angry like a cat who's stomach just got touched (wide eyed, looks innocent enough, but her claws haven't been trimmed for weeks).

I sat at the front of the bus, ready to give up my seat for priority riders, when a heavily intoxicated man got on at York street. He was weaving around, trying to get his change out of his pocket, stalling the inevitable "I don't have enough change. I just need to get to Osborne" line. The bus driver stepped on the gas, and the drunk guy grabbed onto a pole and swung around, nearly hitting the sloshy, sloppy, gravel filled aisle, shouting "Hey bus driver! You nearly broke my balls!"

The ever articulate, and sauced up gentleman decided the spot beside me was the best seat for him to occupy. My claws came out, and were looking for the most expensive leather couch around to tear apart. He shouted, again, at the driver "You almost broke my balls!" I, eyes wide, tail poofed out, hair on the back of my neck like pins, shouted back "No one gives a fuck about your balls! Stop talking about your balls! Or I really will break them." Every single rider laughed. I just noticed my elevated heart rate, my overheated self in snow pants and scarf, and that I couldn't get the image of cracked walnuts out of my mind.

He stopped shouting. And, at my stop, I told the driver that "the guy sitting next to me is a total douche and making people uncomfortable." Justice was swift, and the driver kicked him off the bus.

Walking away from the stop, the deathly cold evening air helped perpetuate an eternal echo of the man at the bus stop shouting "He broke my balls, man!" 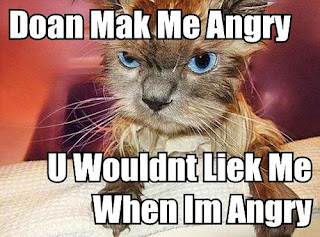