I've never really considered that people from out of town would have this problem, but here's a story from Kevin about trying to navigate the whatchamacallit thing that you put your change into:


I had just moved to Winnipeg and it was my first time taking the bus since I was a kid in Brandon, so I enlisted in the help of my friends to help me understand the rules of taking the bus and the etiquette that was expected.

The next day I stood waiting for the bus with $1.65 in exact change in my hand. The bus arrived at my stop, the doors opened and I stepped inside. I said hello to the driver and my eyes quickly darted around, looking for where to put my money. I saw the fare box, the tall cylindrical object that holds the money, and I proceeded to dump my coins into it.

"Hey, that's my coffee!" he said. It was then that I realized what I thought was the fare box was in fact the bus driver's coffee in a tall metal thermos, and I had just thrown a bunch of loose change into it. The actual fare box, a large metal and glass container, was just a few inches from the coffee. "Y'know, I don't take tips," the driver said.

The driver could tell I was obviously flustered and simply said “Don’t worry about it.” I scooped up my money, minus the dimes that were now swimming around in the bus driver's coffee, and dumped it into the fare box (the real one this time). I quickly and quietly apologized to him, asked for my transfer, and embarassingly took my seat. 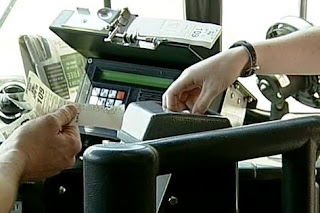