Here's a story from Jeff that he calls Shit Socks, I imagine there must be someone out there who has an addendum to this story: 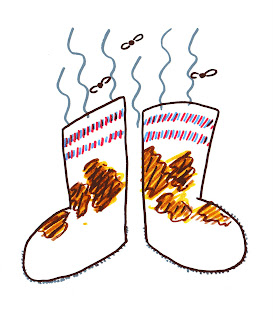 I was 21 and still living in Transcona. It's a long #47 bus to get to downtown, and that summer I was working for the WFG so had to bus all the way there. It was hot out and I was to work all day. I was wearing shorts and white socks with sneakers.

I get on the bus and it's full except for, almost inexplicably, an empty two seater. I sit. Two blocks later I realize that I had somehow stepped in dog poop. No big deal, except that on the bus ride I'd been rubbing my feet together and my clean white socks were now covered in sh*t.

I had, and took, alot of time to think about what to do about this. I wanted to take the socks off, but because there were so many people on it I had to be really sneaky in sliding them off without drawing attention to myself. But now instead of wearing sh*t socks I was holding sh*t socks. I didn't want to compound things by carrying sh*t socks, so I put them on the seat beside me. Then, I got off at my stop.

Later that day, sitting at the desk barefoot in sneakers, it dawned on me that someone will have sat in that seat beside those sh*t smeared socks.